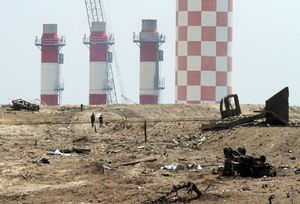 13 dead and many injured in effect of an explosion at a naval base on Cyprus, caused through negligence and bad politics. Politics here is defined as ‘how things are handled’. My personal experience of life on the island is that more often than not responsibilities are being shifted around and things are not ‘handled’, i.e. not faced, or to say the least: not handled well and efficiently. Bureaucracy is a plague.

The ‘responsibilities’ in this particular case are still being investigated in an attempt to address and hold accountable those that had been aware of the problem and did nothing about it. Meanwhile people in high places are trying to wash their hands.

Once again it is not the common good that dictates action and reaction, but the forces of ‘power’ and ‘money’ – the forces that promise ‘reward’ or ‘punishment’ according to the ‘political command’ of the Cyprus new world order, which, just like everywhere else, is the old world order, the status quo of power, favoritism and secrecy.

In Cyprus the tragic explosion that caused a severe electricity problem and the death of innocent and mostly young people are being used, like many other tragedies before, for purposes of party-politics and the exaltation of ideologies.

It seems that within the party life of this tragic island there is no other way of communing other than the ‘good old’ power-games and paroles exchange. In a macabre rhetoric the dead have been martyrized. Emotional pressure leads to blame and projections. Self-righteousness rules the hearts and minds of all dogmatism – be it religion, nationalism, partyism or personal cultism. Cyprus politics was long based on nepotism and this has not changed. Leftist and right-wing fans are busy mutually blaming each-other – history repeating – pointing fingers at ‘the others’ and calling each-other fascist.

In a way they are both right about that: any separatist, dogmatic approach to reality, and especially the mutation of facts into political propaganda means, is fascism. Any self-righteousness about reality in denial of the fact that we are all responsible leads to one thing only: WAR. And whether this war takes place innerly within individuals’ minds and hearts or is acted out as political agendas and party tactics at different levels – it is WAR.

(Read my Blog on WAR http://breath-expression.blogspot.com/2011/07/of-war-and-raw-nature-of-life.html)

It is unbelievable that, faced with such a tragedy that affects all people equally, Cypriot politics continue to sing the same song (…how long!) and Cypriots still fall into pointing fingers and abdicating responsibility instead of standing together and taking the opportunity to once and for all find solutions that transcend separation, transcend fascism – fascism being any form of projected aggression based on the refusal to see and recognize that we all in fact share common interests on common ground and that we should thus be able to see and do what is best for all in all ways.

This obviously would practically imply putting aside any ego issues and stopping the patterns that we’ve been existing within – to once and for all break the bounds of the boxes we have created to ‘protect’ ourselves from each-other. It is time to stop the insanity that separates life.

Investigate Equality & Oneness as the practical solution proposal for humanity and the world: Equal Money System and Desteni

Here a Greek commentary about the current situation on the island: Η θεωρία της “μεγάλης έκρηξης”